We left Rappalo in the pouring rain and travelled an hour along the coast to Levanto. This was the perfect base from which to explore the Cinque Terre as it had a campsite and a railway station. We had never really heard of the Cinque Terre before we arrived in the region but more Lonley Planet research from Emily revealed this beautiful Unesco World Heritage site.

The name literally translates to “Five Lands” but really means the five villages of Monterosso al Mare, Vernazza, Corniglia, Manarola, and Riomaggiore. These beautiful villages are perched on the side of the cliffs on one of the most sun-drenched and languid stretches of coast in all of Italy. As a result it is one of the most tourist-packed. 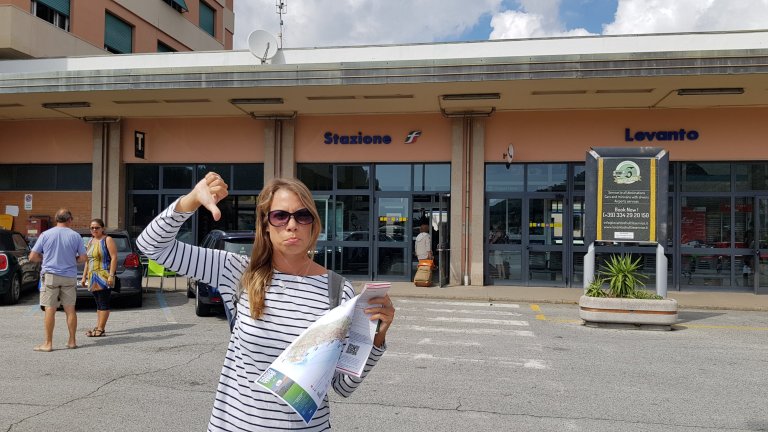 We originally wanted to explore the villages on the Sunday but found out the night before there was a 24hr train strike. Dam, another enforced beach day, not terrible. 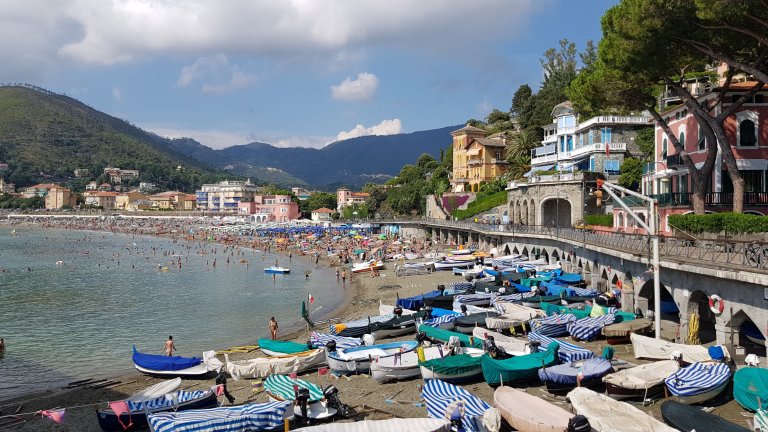 The next day we arrived at the station early, along with hoards of other tourists. The train arrived 20 minutes late and was already full so it was a bit of a squeeze and reminded us of the Tube back in London. We thought we were being clever by heading to the furthest village first bit it seems everyone had the same idea.

Riomaggiore is the most southern village of the Cinque Terre. The origins of Riomaggiore date back to the 8th Century, when the inhabitants of the Vara valley, searching a milder climate to raise grapevines and olive-trees without the fear of pirate raids, moved towards the coast.

The town climbs up along the ridges overlooking the sea and it is characterized from the typical stone houses with coloured façades and slate-roofs.

After an hour exploring we headed back to the station where Emily found some colourful tiles to admire before heading to get to our next stop, Manarola. 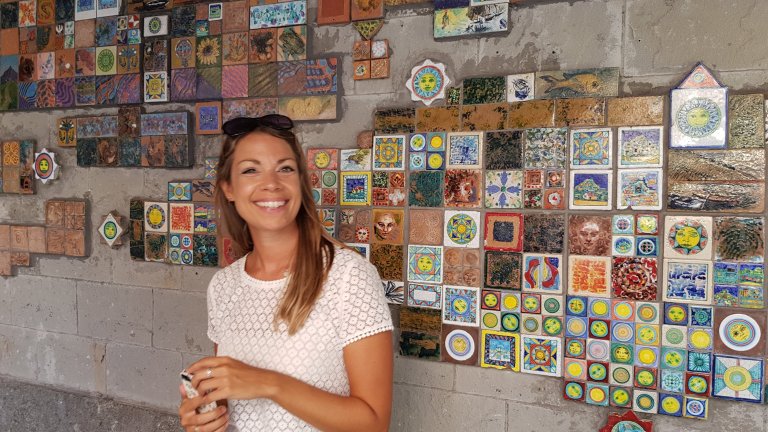 Manarola, built on a high rock 70 metres above sea level, is one of the most charming and romantic of thevillages. The tiny harbor features a boat ramp, multicoloured houses facing the sea, a tiny piazza with seafood restaurants.

Along the main road the boats are pulled onto dry land on trolleys every time the sea is rough. Although there is no real beach here, it had some of the best deep-water swimming around these parts.

The village is all ups and downs, with steep narrow alleys leading to the sea. Another peculiarity of Manarola is a pyramid in white cement whose peak can be seen rising between the taller houses and is used as a navigational reference point for all those at sea.

We missed out Corniglia so we could spend longer in the remaining two villages of Vernazza and Monterossa.

The small fishing village Vernazza is probably the most characteristic of the Cinque Terre and is classified as one of the most beautiful villages in Italy. Vernazza was founded about 1000 A.D. and was ruled by the Republic of Genoa starting in 1276. The medieval castle, Belforte, was built in the mid-1500’s, primarily to protect the village from pirates. 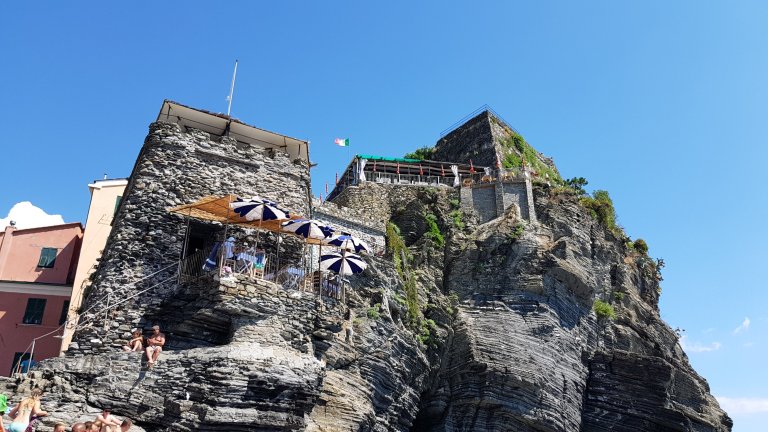 The tiny port is surrounded by subtle colourful pastels and the charming piazza is lined with good restaurants and bars. The village is surrounded by very steeply-terraced olive groves which are said to produce among the finest olive oil in the country. 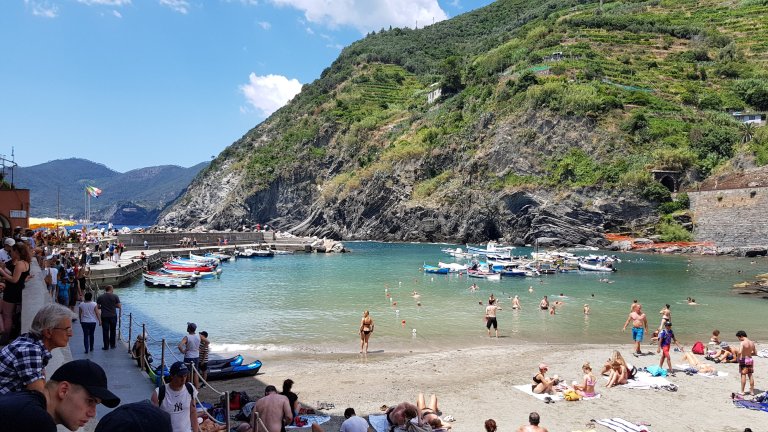 We enjoyed an amazing lunch right beneath the castle. Emily opted for the lasagne and I opted for a local speciality of genovese pesto gnocci.

After lunch and buoyed on by the locals, I changed into my swimmers and dove into the cooling waters for a refreshing dip. Bliss.

Last but not least came Monterosso, which is the largest of the five. The village is located on hills cultivated with vines and olives. The vegetation surrounds the built-up area like an embrace; its amazing beaches, its beautiful reefs and the sea’s crystal clear waters make this small village one of the most hospitable of the Ligurian Riviera. It is probably the only one we would consider as a fly and flop location.

The village is divided in two parts marked by the medieval tower of Aurora.

The new part of town, Fegina, is full of life with quality hotels and restaurants. It is also dominated by the famous concrete statue of the Giant, built beside the terrace of a local villa. This statue was created at the beginning of the 20th century by Levacher and Minerbi, an architect and a sculptor, and represents Neptune, the god of the sea. Now it has become the symbol of Monterosso.

We never really had the time to lounge on the beach so I think we will keep this one in the bag for a revisit someday.

Life is a daring adventure, or nothing View all posts by Gary