We left Narbonne in the afternoon and headed about 100 miles north east to the town of Uzes.

We were keen to test our ’France Passion’ membership which gives motorhome owners overnight parking for free on farming or vineyard land. The idea behind the program is that it enables you to get off the beaten track and explore the hidden treasures of rural France. In return for your stopover, you are welcome to purchase some goods produced onsite. As we rocked up to our selected stop (a vineyard just 200m out of town), we were relieved to take one of the last spots available and headed to the reception to introduce ourselves.

The owner was so friendly, offering us two nights for free with the included use of the facilities to fill up with water and dump waste. There was no heavy sell whatsoever with the wine they produced but after a free tasting we snapped up two bottles of Rose and a jar of confit onions for the total bargain price of 12 euros. If all France Passion sites are as accommodating as this then we’ll be sorted for July.

After quaffing half a bottle of wine we sauntered into town to explore Uzès in the magical late afternoon sunlight. 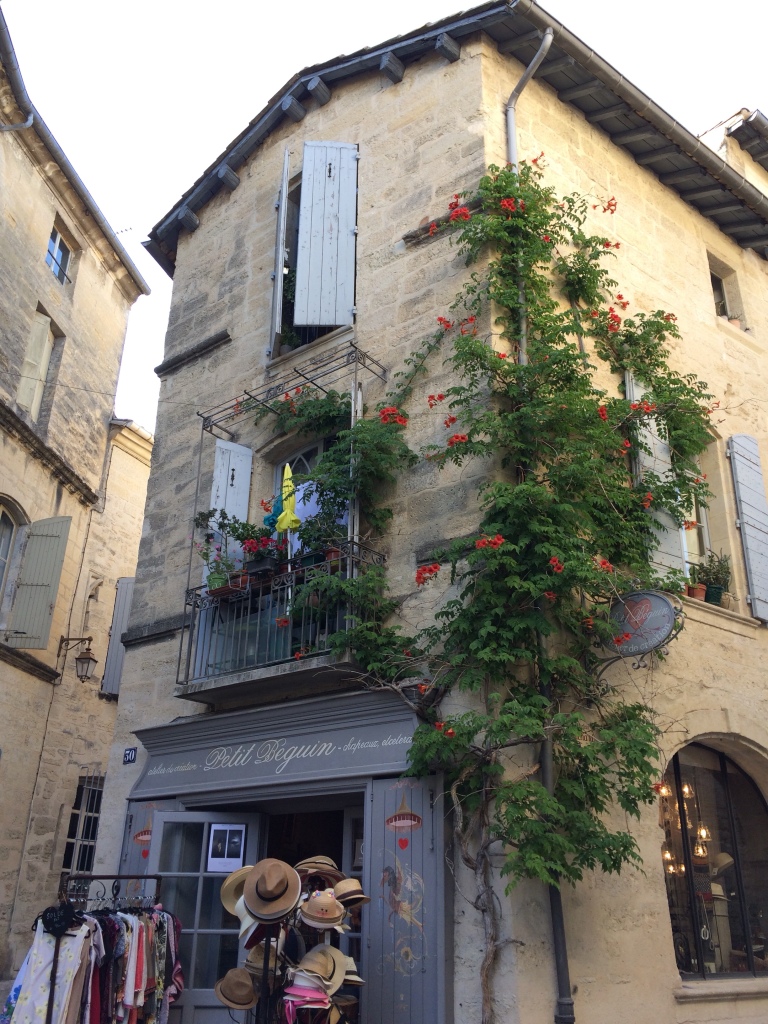 The old town, enclosed by a large stone wall, was a maze of beautiful cobbled streets. Every turn offered a square or fountain more beautiful than the one before.

It was so impossibly perfect and quaint that it felt like something from a film set. The architecture was stunning and the boutiques were so stylish.

We settled down to watch Portugal vs Uruguay match in the main square called Place aux Herbes. It was full of families eating al fresco and locals drinking with friends and the atmosphere was lovely and warm. 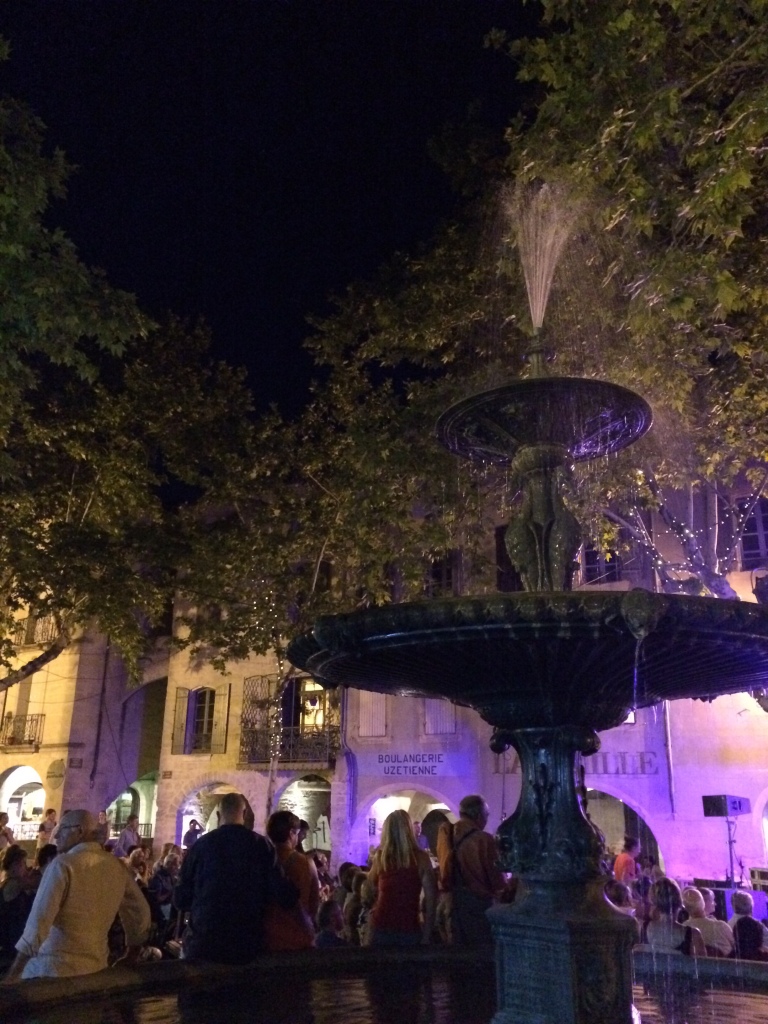 To our surprise an awesome jazz band started playing as the evening began and we turned our chairs to enjoy the entertainment.

There was some sort of book fair going on with illustrators creating personalised copies for buyers and the jazz band accompanied the festivities which made the perfect end to the evening.

The next day dawned as the sun streamed through the motorhome windows and as we’d been warned, it was set to be an absolute scorcher of a day. We had set our sights on a bike ride to visit the Roman Pont Du Gard aqueduct some 16km away. The vineyard owner had advised that if we were to go, we should beat the midday sun and leave early. As always, best laid plans went to shit when Gary discovered that my bike had a flat tyre. Considering that the bikes were less than 24 hours in our hands, this was hugely disappointing. Thankfully we had the foresight to buy a repair kit and spare inner tyres and Gary set to work on fixing her up. Needless to say that Gary expertly sorted this which is fortunate because I wouldn’t have a clue in this department.

Better late than never we set off on our shiny new bikes and plumped for the scenic route as opposed to the direct road that was busy. This was a wonderful idea at the beginning and we cycled past gorgeous fields of sunflowers and vineyards and crossed babbling brooks. 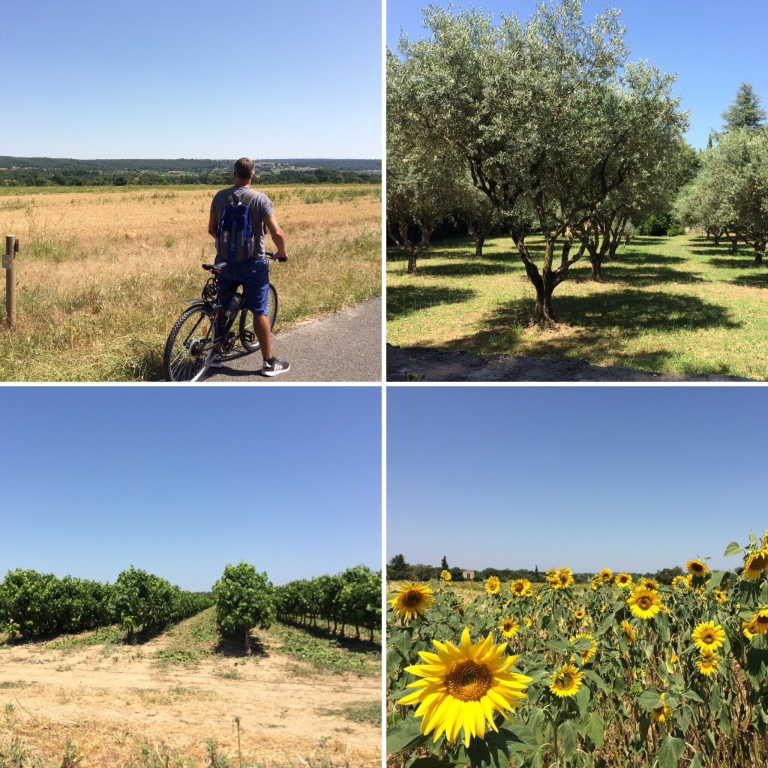 Not long into the journey however we realised that Google was taking us on a rather convoluted route that added plenty of mileage and had us sweating our arses off in the searing heat. We were also led off road and found ourselves bumping along tough terrain and actually through farmer’s fields, which felt a little naughty. We eventually made it back onto a sensible road and finished the ride in a more direct manner but we were knackered and the cheap seats had done their damage on our sensitive bottoms and we dismounted looking like something from a John Wayne film.

The Pont du Gard is an ancient Roman aqueduct that crosses the Gardon River and boasts three tiers and 35 arches. 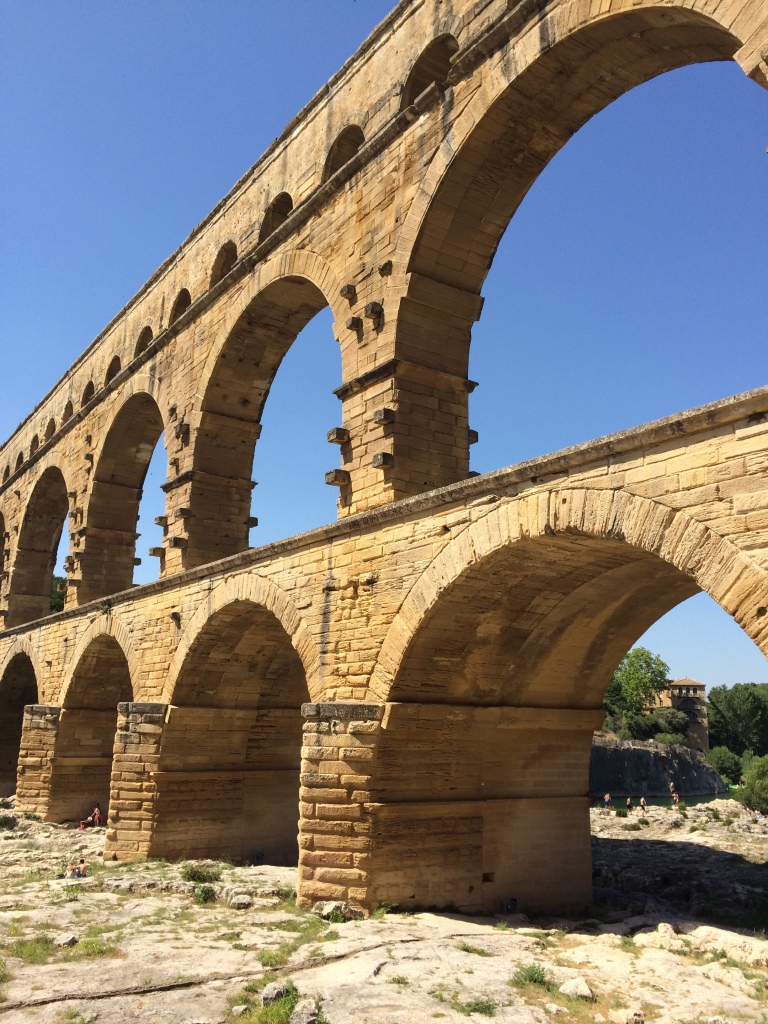 It’s incredibly impressive thanks to its sheer size and grandeur. We were massively relieved to see plenty of people swimming in the river and we wasted no time in joining in. The water was quite fast flowing at its deepest point and was deliciously cool and fresh. 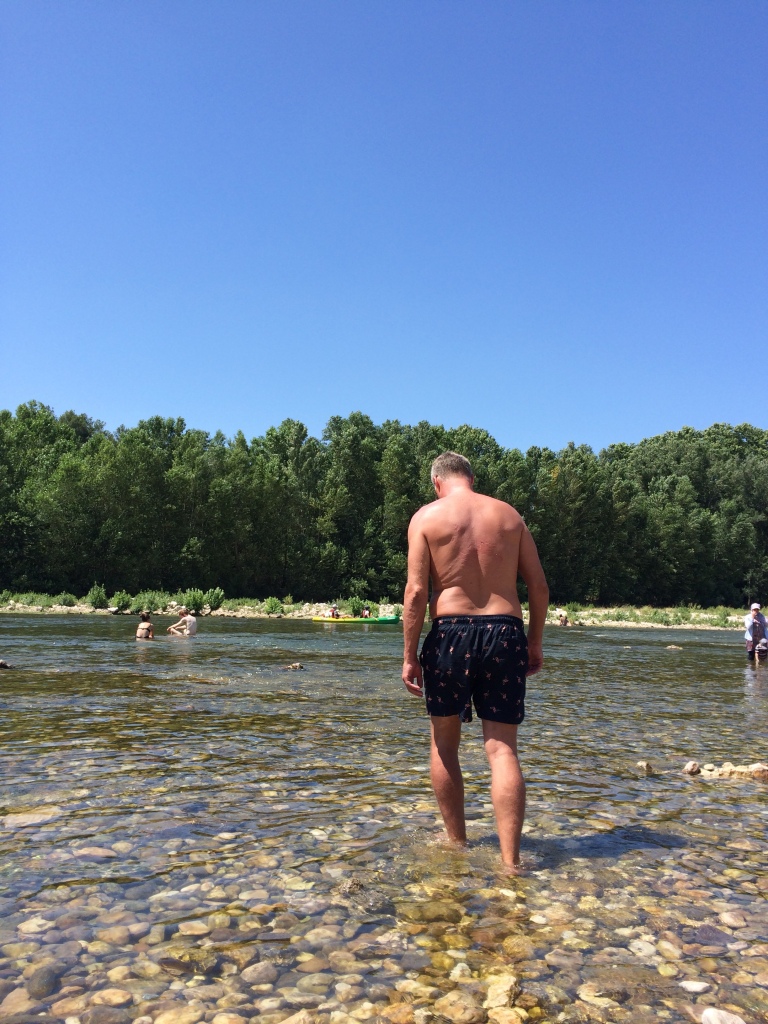 The river bed was very rocky and the pebbles were slippy as hell so we gingerly waded in but it was so worth the journey. We paddled, swam and sunbathed on the banks and devoured ice creams in the beating sun. 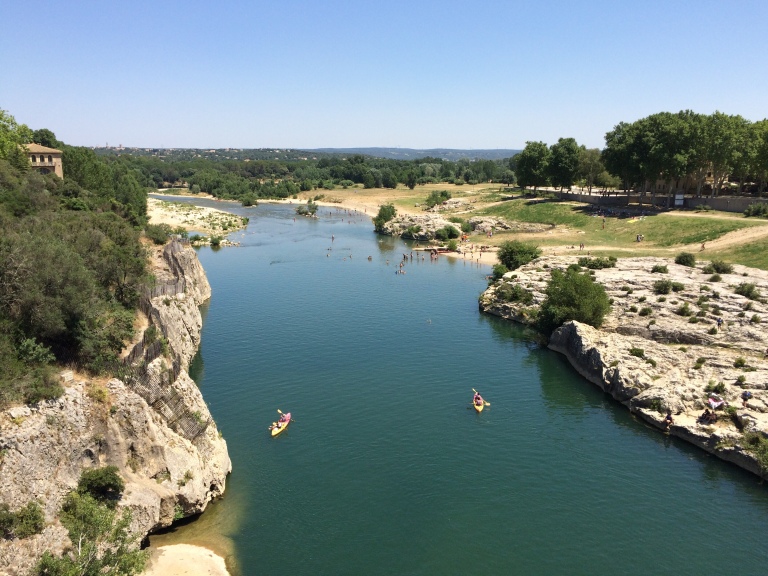 We crossed the aqueduct twice and marvelled at it from every angle before tearing ourselves away for the feared cycle home. 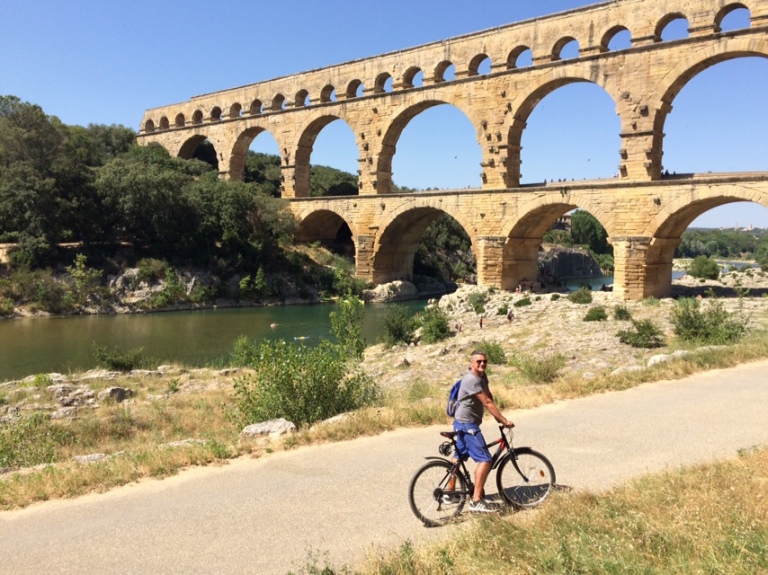 We were pretty tired so we decided to take the road back and really enjoyed the smooth paved route for the first 15 mins before we hit the start of the long ascent back up to Uzes. We hadn’t noticed on the way but on our return it was very clear that we were gradually climbing. Small hills at first and then long, drawn-out inclines that saw us changing down gears desperately trying to conserve energy. Gary had way more verve in him and he powered through but a couple of times I wimped out and walked my bike up the sharp, steep hills. I now have a new found respect for his choice in an electric bike (but don’t tell him that!)

We eventually made it back to Harvey and celebrated with about 3 litres of water. Having well and truly earned a treat, we walked into town for dinner. We found a great bistro that had a handwritten menu of just two starters, three mains and two deserts. We both chose the bavette steak which was served with insanely good dauphinois potatoes that we still talk about now. Gary finished with the house banoffee and I plumped for chocolate fondant that oozed melted chocolate when cut. It was the perfect end to a big day. We hit a wall of tiredness almost immediately and went back to laze around and rub our full tummies.