After an early night we woke refreshed and ready to embark upon the next leg of our trip along the south coast.

We’d been given a tip off from a couple of people that Talalla is a really beautiful beach with a relatively untouched and secluded feel which we liked the sound of.

Having finished another epic breakfast at My Village Hotel we packed up yet again. We grabbed a tuk tuk to the main bus station at Tissamaharama and then hopped straight on a bus headed west to Matara. I’m not sure if our timing on buses has been really lucky, or in fact there are plenty of regular departures but we haven’t had to wait yet. The locals and bus conductors are very approachable and kind hearted and always keen to help a pair of confused looking tourists. All the buses are kitted out with incredibly cheesy fantasy art that blows my mind. The best I’ve spotted yet was an epic scene from Titanic air brushed on the side but I couldn’t get my camera out quick enough, so this jazzy Pegasus will have to suffice.

It’s been 30 degrees today so we were sweltering away on the bus with our legs sticking to the plastic seats. I was grateful for the breeze that blasted through the rickety sash window as we sped along. The drivers tend to accelerate fast and hurtle along, giving very little notice before slamming on the brakes to let a passenger get off or tuck back in behind a car when overtaking in the face of oncoming traffic. Sometimes it’s a blessing to have no visibility of what’s happening ahead. The bus journey took just under 3 hours, but with so much interesting scenery to look at along the way, it went quickly. Sri Lanka really is a sensory overload. The heat, the car fumes, the dusty roads, the crazy chatter of sellers offering snacks on the bus all adds to the immersive experience.

We were let off the bus in seemingly the middle of nowhere, with no beach in sight. We walked for about 10 minutes towards the coast and found our new digs, Sunshine Beach. We have a big room with a balcony overlooking the sea and we can hear the waves lapping the coast at all times. Having been inland pretty much since we arrived two weeks ago, it now feels lovely to have a lot of time to leisurely explore the coast. 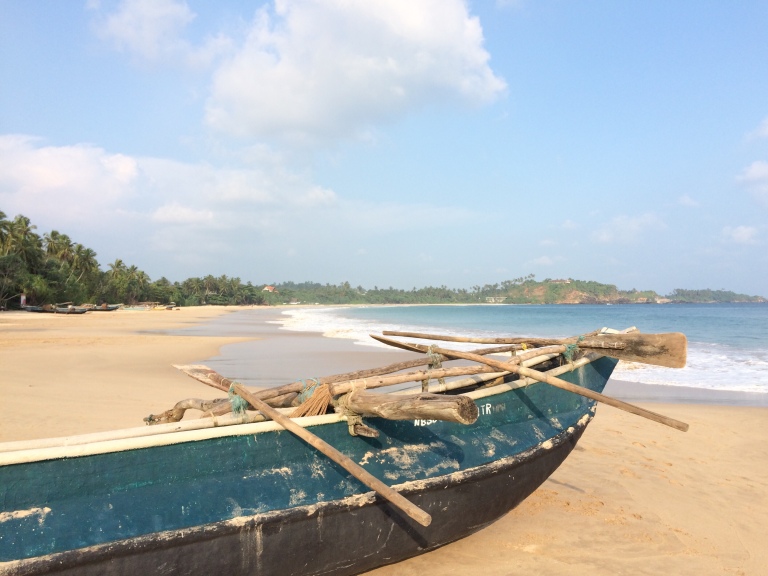 We took a walk along the beach in the afternoon to get our bearings. Talalla is beautiful with a long curved bay of golden sand. There are just enough guest houses and a couple of bars to service the small number of tourists here, but otherwise it’s very quiet.

We climbed up one side of the beach to a bar with a great view across the bay for a couple of beers as the sun started to set.

As we headed back there were locals playing cricket on the beach and fisherman hauling in their nets. This was a real spectacle. It almost felt as though the whole village came out to help and spectate the ritual. It took two lines of men steadily pulling the nets from the water, almost like a tug-of-war with the sea. 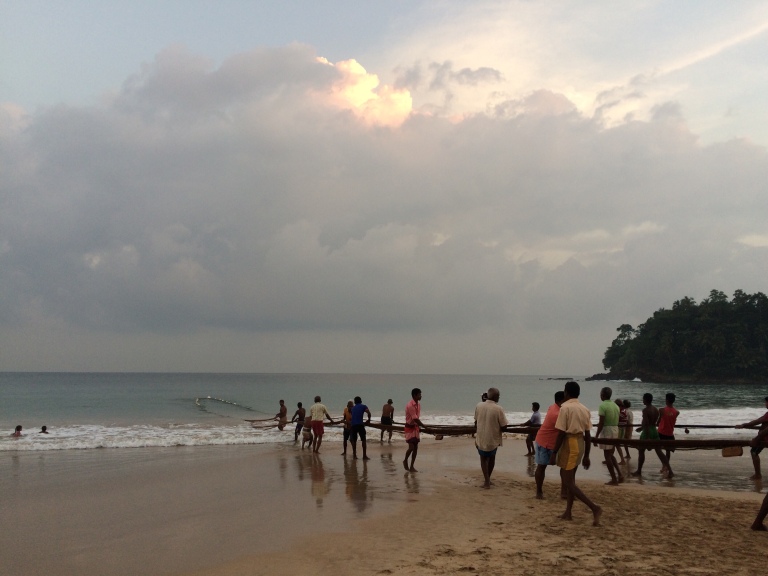 The anticipation grew as the net drew closer to the shore and then all you could see was a flapping on the beach as the fish hit the sand. There were a couple of smallish Tuna and plenty of other fish to compensate them for their efforts. 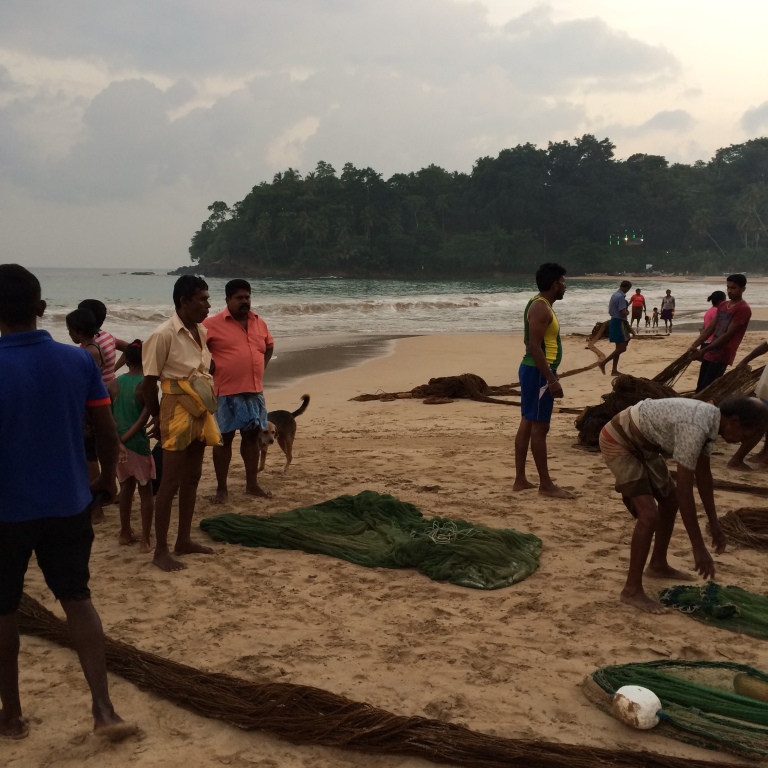 That night we had another wonderful curry dinner at our guesthouse. Now we are by the coast we can expect more seafood, and the prawns we had in coconut milk were delicious.